Almost 30 years ago, two young guys met at a friends’ party in Verbier. They shared their travel and adventure experiences, and their passion for photography. Nicolas was a Himalayas freak, had trekked some untraveled routes between Tibet and Nepal in the mid-80’s, was one of the first Westerners to follow the Chadar, the Frozen River of Zanskar. Paul was addicted to India, had lived and travelled all over the sub-continent. They realized that they knew quite a bit about the place and very naively, they decided to set up a trekking company. This would be a nice complement to their seasonal jobs, working as a paragliding instructor, telemark instructor or ski-man in a sports store for Nicolas, or driving around Switzerland as an outdoor equipment rep for Paul. Leading a few trips in the Himalayas, paid for by clients, what else could one have dreamed of then !

Truth is, they knew nothing about the travel industry ! But they slowly learned, secured deals with major airlines who helped them a lot, negotiated with local ground handlers and hospitality pros, slowly forcing their way into the

Asia travel world to finally gain a widely recognized reputation as THE leading Swiss specialist for India and Asia. From trekking to cultural journeys, from the tents to the most exclusive and luxurious palaces, from India to South-East Asia, from the Himalayas to Central Asia, they expanded their knowledge and areas of expertise over the years.

They had a real craving for exploration, discovering new places, designing off the beaten track itineraries, finding small, exclusive and authentic properties. As Travel Designers, their thirst for novelties was unquenchable. They attended the best travel trade shows, met with professionals from all around the world, and somewhat, at the beginning of the second decade of this new millennium, they turned their eyes toward Southern Africa and South America. The passion was boosted again !

Not only is Nicolas an avid pilot (hang-gliding & paragliding instructor, glider pilot), a skier (telemark instructor), a hiker and trail-runner, he’s also been a passionate mountain-biker since the 80’s. Mountain-biking, and now e-biking, is how he commutes between home and office most of the good days when snow is not covering his mountain roads. Paul is also an enthusiastic hiker and runner, and since he got on an e-bike, he’s rediscovered the joy of riding in the mountains.

So the development that Horizons Nouveaux is now undertaking is logical: welcoming overseas and regional visitors to Switzerland to take them on extraordinary e-mountain-bike trips across what we still consider to be one of the most beautiful and picturesque mountain regions in the world : The Alps! Come and live an amazing adventure with our certified Swiss Cycling Guides, taste local specialities and some of the best Swiss wines, discover century old villages set in the midst of the mountains, get to know different cultures in one of the smallest countries in the world, but one with a large diversity! 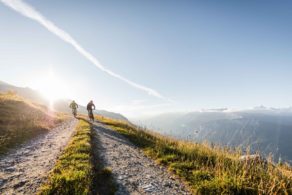 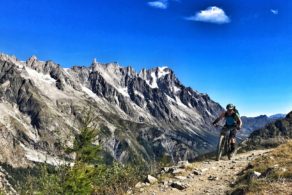 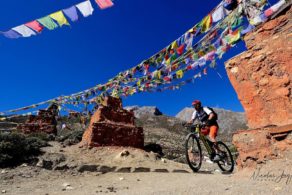 Want to know more in the meantime ?